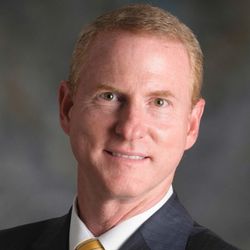 He spent 21 years in the Navy, with tours of duty that include:

After retiring from the Navy, he joined Jacobs in Houston, TX as a regional program executive, working with clients such as Memorial Hermann, Houston Independent School District, and Houston Community College. He subsequently held the position of Executive Director for Facilities Planning, Design and Construction at the University of Texas MD Anderson Cancer Center in Houston. Whit is currently the Chief Administrative Officer for Facilities, Capital Management Retail, Hospitality, Hospital and Offsite Services for UC San Diego Health.

Whit Robinson holds professional licenses for both Architecture and Interior Design in the State of Florida. He is a member of the American Institute of Architects, American Legion, Military Officers Association of America, Disabled American Veterans, and Veterans of Foreign Wars.

Early in his career, Whit Robinson worked as an architectural draftsman for various Florida architectural firms, lead designer for a kitchen and bath design firm, president and founder of the University of Miami Habitat for Humanity Chapter, and has owned a small interior design business in Miami. He had also worked as a project manager/developer for several related corporations in the Miami area, performing small and large-scale renovations on a variety of businesses for short-fused customer requirements.

Additionally, his team on the Camp Pendleton Hospital Replacement project won over 22 awards celebrating safety, innovation, and quality, including awards by the Design Build Institute of America (DBIA), the 2011 American Society for Quality (ASQ) California Team Excellence Award, and the “People’s Choice Award” for most complex project in the 2012 International Team Excellence competition. His team at MD Anderson was unanimously voted Client of the Year by the Society for Marketing Professional Services in 2017. He holds various military achievements including the Presidential Service Badge (White House Military Office), Seabee Combat Warfare Pin, and various personal medals and unit awards.

He is married to Kathie Lynn (Guerra) Robinson and is the proud father of teenage twins Naomi and Caldwell.