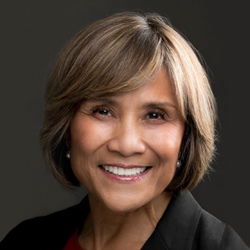 Serve a mission greater than yourself. It’s a powerful motto that exemplifies the life, work and impact of Vice Admiral (Ret.) Raquel C. Bono, MD, who served more than 30 years with honor and distinction as a Navy Officer. A board-certified trauma surgeon, Dr. Bono was the first woman surgeon in the military to hold the rank of Vice Admiral. Her legacy is as rich as it is deep, going well beyond the military and medicine. Recently appointed the Chief Health Officer of Viking and the former head of Washington state’s COVID-19 healthcare response team by Governor Jay Inslee, Bono continues to empower civilians of every background and leaders in all sectors with her transformational leadership, willingness to disrupt convention, and passion for pioneering positive change.

Dr. Bono is the recently retired former CEO and director of the Defense Health Agency (DHA). In this role she led efforts to enable all branches of the U.S. military to provide streamlined healthcare services. “So much of what I’ve learned in the military health system has great applicability to the private healthcare system,” said Dr. Bono, who has been named among Modern Healthcare’s 50 Most Influential Clinical Executive Leaders, 50 Most Influential Healthcare Physician Executives and Leaders, and 100 Most Influential People in Healthcare. Recognized as a creative disruptor of conventional healthcare and laser-focused on co-creating healthcare delivery informed by patients’ values and priorities, Dr. Bono served for 20 years in various leadership positions within the Department of Defense’s (DoD) Military Health System. At the DHA, she integrated an unprecedented $50 billion worldwide health enterprise of 50 hospitals and 300 clinics formerly managed by individual military branches. She also oversaw the DoD deployment of the enterprise health record and advanced the development of the largest federated health system with the Department of Defense and the Veterans’ Health Administration. In 2020, Bono was named a senior fellow at Johns Hopkins University Applied Physics Laboratory.

As the first female three-star admiral in the medical field in the history of the U.S. Navy, as well as the first Asian-American woman promoted to Vice Admiral, Dr. Bono is accustomed to blazing paths. Born in the Philippines and raised in Texas, she credits her father – also a Navy surgeon – for instilling in her the belief that she could do and be anything, as long as she continued to serve a greater mission than herself. Dr. Bono has dedicated her life’s work to doing exactly that, while inspiring and mentoring others to do the same.

Dr. Bono has made it part of her mission to encourage women and minorities to pursue careers in the military and medicine. A firm believer that diversity strengthens organizations, she launched the Military Health Corps’ Female Physicians Leadership Course to encourage diversity, retain women physicians, and give military women the skills they need to succeed in senior leadership roles. Today, it is an annual standalone, three-day course, training more than 100 women military physicians each year. Her advice to attendees: “As a leader, you have to be willing to make change happen. Leadership should make you uncomfortable; it’s not for the weak of heart because it takes courage, self-knowledge and skill.”

Dr. Bono received her bachelor’s degree from the University of Texas, Austin; her Master of Business Administration from Washington State University (Spokane, WA); and her medical degree from Texas Tech Health Sciences Center (Lubbock, TX). She completed her surgical internship and residency at the Naval Medical Center (Portsmouth, VA) and performed a trauma and critical care fellowship at the Eastern Virginia Graduate School of Medicine (Norfolk, VA).