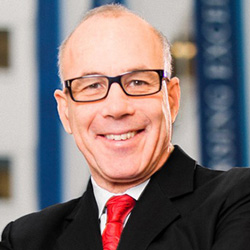 Ranked No. 2 on Modern Healthcare’s 100 Most Influential People in Healthcare.
Bestselling Author including Bless This Mess: A Picture Story of Healthcare in America

DR. STEPHEN KLASKO is a transformative leader and advocate for a revolution in our systems of healthcare and higher education. In 2020, Stephen published two books: “Un-Healthcare: From Sick Care to Health Assurance”, and “Patient No Longer: Why Healthcare Must Deliver the Care Experience that Consumers Want and Expect”. His best-selling 2018 book is titled, “Bless This Mess: A Picture Story of Healthcare in America”.

As President of Philadelphia-based Thomas Jefferson University and CEO of Jefferson Health he has steered since 2013 one of the nation’s fastest-growing academic health institutions based on his vision of re-imagining health care and higher education. His 2017 merger of Thomas Jefferson University with Philadelphia University creates a pre-eminent professional university that includes top-20 programs in fashion and design, coupled with the first design thinking curriculum in a medical school, and with the nation’s leading research on empathy.

His track record of success at creating and implementing programs that are shaping the future of health care earned him a place among Fast Company’s 100 Most Creative People in Business in 2018; and Ernst & Young’s Greater Philadelphia Entrepreneur of the Year in 2018. He is also ranked #2 on Modern Healthcare’s list of Most Influential People in Healthcare. For 2018-19 U.S.News & World Report has ranked Thomas Jefferson University Hospital among the nation’s best in 10 specialties, and Magee Rehabilitation Hospital – Jefferson Health 13th Best Hospital in the nation for physical rehabilitation. In 2018, Jefferson was invited to join the World Economic Forum.

Dr. Klasko is a nationally recognized advocate for healthcare transformation, having served as dean of two medical colleges, and leader of three academic health centers before becoming President and CEO at Jefferson. He is author of 1999’s The Phantom Stethoscope, 2016’s We Can Fix Healthcare in America, and editor in chief of the journal “Healthcare Transformation.”

Under his leadership, Jefferson Health has grown from three hospitals to 14 with revenues that grew from $2.2 billion to more than $5.1 billion, annualized, with more than 30,000 employees and 6,600 physicians/practitioners.. The new Jefferson focuses on managing the health of populations in southeastern Pennsylvania and southern New Jersey. Jefferson has the largest faculty-based tele-health network in the country, the NCI-designated Sidney Kimmel Cancer Center, and an outpatient footprint that is among the most technologically advanced in the region.

This rapid growth led in 2017 to GE Healthcare signing with Jefferson Health the largest risk-shared partnership in the U.S., aimed at saving more than $500 million over eight years.

Through a unique four pillar model, academic-clinical-innovation-philanthropy, Jefferson has attracted both venture capital and transformational gifts. Sidney and Caroline Kimmel donated $110 million to Jefferson on June 18, 2014, the largest gift in the University’s history. Philanthropy and innovation have also resulted in the addition of the Marcus Institute of Integrative Health, nationally recognized for its modern medical and integrated therapies, and the Jane and Leonard Korman Respiratory Institute, a unique partnership between Jefferson Health and National Jewish Health.

Previously, as CEO of USF Health and Dean of the Morsani College of Medicine at the University of South Florida, Dr. Klasko built the nation’s largest “assessment of technical and teamwork competence” center known as CAMLS (Center for Advanced Medical Learning and Simulation). He also led a partnership with the country’s largest retirement community, The Villages, to create “America’s healthiest hometown,” an innovative primary-care-driven, patient-centric, Medicare-based accountable care model.

Dr. Klasko is ideally suited to lead such initiatives, having completed a grant after receiving his MBA from the Wharton School of Business of the University of Pennsylvania on selecting and educating physicians to be leaders of change. His unique medical education program at USF, called SELECT (Scholarly Excellence, Leadership Education, Collaborative Training), is recognized for its focus on choosing medical students based on emotional intelligence and leadership potential.

Dr. Klasko also serves on the board of Teleflex (TFX), a NYSE global medical device company with a market cap of $12 billion. He has served on both the audit committee and governance committee and has been a director since 2008. He also is a trustee of Lehigh University, one of the nation’s leading engineering and business schools.

He is married to Colleen Wyse, a fashion leader and founder of The Philadelphia Trunk Show, and has three children: Lynne, David and Jill.