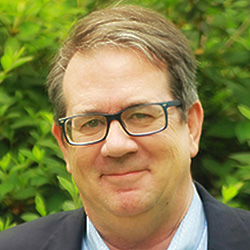 Ron Galloway is a researcher who focuses primarily on new trends and technologies in healthcare. He is the director of 4 films, has written one book and many institutional research reports. He began his career as an analyst with Shearson Smith Barney and continued as an analyst and portfolio manager for 20 years.

Ron’s firm 818 Research conducts on-demand research for clients focused on healthcare innovations and their consequences. He is the author of “Potentially Disruptive” a healthcare research project with the Massachusetts Health & Hospital Association.

His business documentary “Why WalMart Works” was the subject of international controversy, and was the first film to ever premiere in the U.S. Capitol Building. His work has been written about in the New York Times, the Wall Street Journal, and New Yorker magazine. Ron has appeared on CNN, CNBC, the BBC, and was the subject of a feature on Jon Stewart’s Daily Show.

Ron has spoken at hundreds of conferences. He is a 1984 graduate of Georgia Tech.