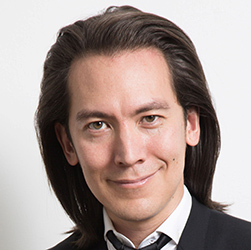 Mike Walsh was a featured speaker at HealthSpaces ’17

Read a summary of his session here.

Mike is the CEO of Tomorrow, a global consultancy on designing companies for the 21st century. He advises leaders on how to thrive in the current era of disruptive technological change. Mike’s clients include many of the global Fortune 500, and as a sought-after keynote speaker, he regularly shares the stage with world leaders and business icons alike. Mike previously founded Jupiter Research in Australia and has also held senior strategy roles at News Corporation in the Asia Pacific Region.

Mike’s best-selling book ‘Futuretainment’, published by Phaidon was the winner of the design award by the Art Director’s Club in New York. Mike’s latest book is The Dictionary Of Dangerous Ideas. Each week he interviews provocative thinkers, innovators and troublemakers on his weekly podcast, ‘Between Worlds’. A true nomad, Mike travels over 300 days a year worldwide, researching trends, collecting innovation case studies and presenting on the future of business.

Prior to being a CEO of Tomorrow, Mike was a pioneer in the digital space since the 1990s, running both successful start-up ventures as well as holding senior leadership positions in established media organizations. With a background in corporate law and management consulting, he began his career at XT3, a spin out from McKinsey and one of the first digital consulting firms created to help major companies embrace the embryonic Web.

During the first digital boom, Mike launched the technology publishing group internet.com in Australia, which went on to become the leading local technology news and events platform in the country. He also founded and ran Jupiter Research in the Asia Pacific, one of the first research agencies to track the early adoption of e-commerce and digital business models by online consumers. During this period, he was recognized as one of Australia’s ‘Top 30 Entrepreneurs Under 30’. Mike then spent five years in senior strategy roles at News Corporation where he helped shape the digital strategy for both their Australian newspaper and Asian TV divisions. Directly engaged by the CEO of Star TV to provide the company with a digital roadmap for their operations, he began his in-depth research into the fast growth markets of Asia, which became the inspiration for his first book, ‘Futuretainment’.