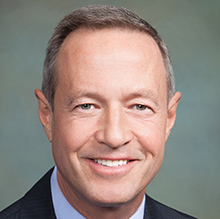 Martin O’Malley was a featured speaker at HealthSpaces.

Governor O’Malley is a former 2016 presidential candidate with nearly 25 years of experience in state and local government. Prior to his two terms as governor of Maryland, he served the city of Baltimore as councilman from 1991 until 1999 and mayor from 1999 until 2007.

During his time in office, Governor O’Malley passed major political milestones that impacted the economy, education, the environment and many social causes. As mayor, his policies helped the people of Baltimore achieve the greatest crime reduction of one of America’s largest cities. As governor, he lead the fight to restore the health of the Chesapeake Bay, to reduce greenhouse gas, to protect the dignity of every child’s home, and to ensure equal rights under the law for all Marylanders.

Governor O’Malley is a charismatic speaker who inspires and empowers next generation leaders to make an impact in their future and their world.