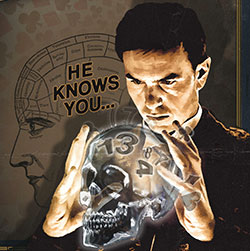 Kevin Viner was a featured performer at HealthSpaces’19.

Considered one of the top mentalists in the world, Kevin Viner has appeared on Penn and Teller: Fool Us, Masters of Illusion, Don’t Blink, commercials for T-Mobile and Now You See Me 2, as well as on the PBS documentary Johnny Carson: King of Late Night. As a corporate entertainer, Kevin has engaged top-level management with Google, Intel, Cisco, Starbucks, and many more.

Kevin started young with his first magic set at five, a passion for the craft and not a shadow of a doubt what his career path would be. By age 14, he’d begun performing at the world-renowned Magic Castle in Hollywood. And by only 17, he was establishing a career as one of the top emerging mentalists in the country. Today, he performs over 150 events annually for clients around the world.

Kevin’s wide-ranging interests often find intriguing ways into his shows. With a degree in mathematics, he can harness probability to determine how guests are most likely to respond. Through his research in psychological profiling, he is able to deduce who may be the best participants in the show. Through his backgrounds in aviation and martial arts, he has honed keen observational skills and reaction times. Through his studies in piano and guitar, he has gained a sense of rhythm that keeps the show flowing constantly. And through his education in comedy and improv, he will keep your guests laughing the entire time.