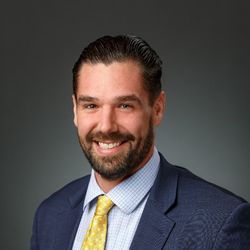 Jonathan Westall, FACHE is the Vice President of Ancillary Services at MLK Community Health in South Los Angeles. He previously held multiple positions at Huntington Hospital in Pasadena including Manager of Security, Director of Security, and Director of Support Services.

Prior to working in the acute care setting, Jonathan oversaw security, emergency response, and parking operations for Sony PlayStation and its subsidiary groups across the United States. Jonathan spent eight years working in various federal, state, and local correctional facilities where he oversaw security operations for an incarcerated population.

Jonathan holds a Bachelor’s degree in Criminal Justice with a minor in Sociology from Upper Iowa University and a Master’s degree in Law Enforcement Administration from Grand Canyon University. He is also a graduate of ACHE’s Senior Executive Program. He is a volunteer leader with IAHSS and was the LA/OC Chapter Chair for 3 years, and served as the International Board’s VP/Secretary in 2020. He also chaired the Hospital Association of Southern California’s Safety and Security Committee from 2018 to 2020 and remains an active member. He is currently treasurer for the AHCE of Southern California.