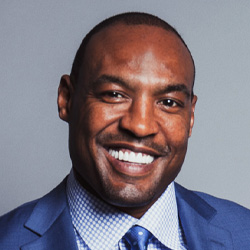 Three-time Super Bowl champion and five-time Pro Bowl selection and described by Sports Illustrated as “one of the hardest hitters in the NFL”, Darren Woodson is one of the greatest players to ever wear a Dallas Cowboys uniform. He was known as one of the most popular vocal leaders of the defense during the 1990’s prior to retiring in 2004 as the team’s all-time leading tackler.

In recognition of his outstanding career, Darren was inducted into the prestigious Cowboys Ring of Honor at AT&T Stadium on November 1, 2015, and the Texas Sports Hall of Fame in February 2017.

After retiring from the NFL Darren worked as a football analyst for 14 years at ESPN, appearing on NFL Live, SportsCenter, and First Take as well as other ESPN platforms.

In 2017, Darren transitioned his leadership skills into the Commercial Real Estate industry where he is currently Managing Principal at Cresa Global, Inc.  Darren is also President and Founder of Counter Find and is actively involved in several business partnerships.

Beyond his remarkable talents and dedicated leadership, Darren has made significant contributions to his community where he consistently supports the C5 Youth Foundation of Texas and other organizations.

Darren continues to coach and teach others how to tackle the challenges of leadership, build a winning team, and compete to be the best! He inspires many to move beyond the mediocre and to create cultures of excellence!