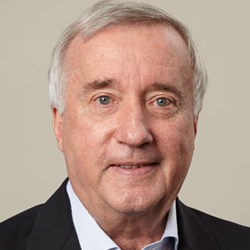 Bruce Komiske is considered a world expert on planning, designing and building iconic “World Class” hospitals.  As a hospital administrator, took responsibility for creating Hasbro Children’s Hospital in Providence, RI and from that point forward he realized that his passion was creating unique facilities that engaged the community and transformed the image of a hospital from a “prison” to a “healing environment”.

From Hasbro, Bruce went on to lead the teams to create many children’s hospitals around the world, including the  early planning for the Sidra Medical Center in Doha, Qatar and most recently,  the award winning, Lurie Children’s Hospital, in Chicago (the world’s tallest children’s hospital – 23 stories).  He has lectured and consulted in over 25 countries and has published seven books, including; Designing the World Best Children’s Hospitals, Vol. I, II, III.  Considered one of the top 5 most influential people in healthcare design by Healthcare Design Magazine.  Bruce was recently featured in a “Hollywood Movie” about the creation of the Maria Fareri Children’s Hospital, where his character was played by Timothy Hutton.