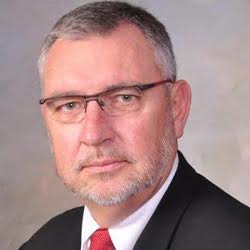 Alan R. Neuner was a featured speaker at HealthSpaces.

Alan R. Neuner, a native of Nazareth, Pennsylvania, received his mechanical engineering degree from Drexel University and worked for several years in the steel and air separation industries. In 1988 he joined the Facilities Operations staff of the Geisinger Health System, an integrated health system with facilities dispersed across a 31-county service area in central and northeastern Pennsylvania. As Vice President for Facilities Operations, Al is responsible for over 300 employees servicing a physical plant of over 10 million square feet. The main campus in Danville realized a significant energy savings because Al and his staff devised a creative strategy to manage energy resources, which resulted in a 40% reduction in overall energy consumption per square foot, including chilled water storage, cogeneration, and LEED commitment. Most recently, the site scored a perfect 100 on EPA’s Energy Star.

Al has won many awards for his achievements. He received the prestigious 2002 Fame Award of Excellence from the Association of Facilities Engineers for his work on legionella remediation, the Chesapeake Bay Foundation awarded him the 2000 Businesses for the Bay Award for large business for pollution prevention and energy reduction, and the 2012 Donald M. Sauerman Award for Outstanding Contributions to the Field of Health Facility Engineering.